Money, the old axiom goes, is the mother’s milk of political campaigns. And taking the saying into consideration, it appears that the Clinton campaign is much better stocked with milk and money than that of the Trump camp.

Consider these sobering numbers: By the end of April, which is the most recently available period for campaign disclosures, the Trump campaign and groups which plan to support him were trailing Clinton by more than $200 million. At this same point in 2012, Mitt Romney’s campaign trailed President Obama by about $65 million less than that.

Based on campaign finance records, Trump and the Republican National Committee combined to raise $209 million through April. But Clinton, the Democratic National Committee, the Hillary Victory joint fundraising committee. and the two super PACs that support her campaign–Priorities USA Action and Correct the Record–raised a combined $410 million. 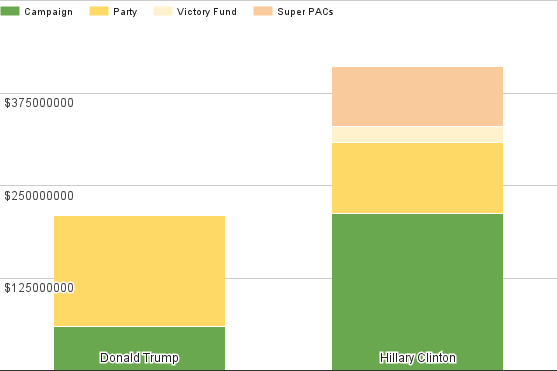 The Trump campaign is also far behind in staff members, with Trump having 70 staff to Clinton’s 732. Staff is essential to fundraising, get out the vote efforts, and communications activities. Yet Clinton has ten times as much staff support as Trump.

Initially, Trump proudly proclaimed that he was planning to self-finance his campaign. But the notoriously tight-fisted real estate mogul is now desperately seeking funding from any source he can locate. The problem for Trump is that most large donors are reluctant to give money to him because they see his race for the White House as doomed.

Trump has said there is no need for him to raise the $1 billion Mitt Romney did in 2012:

“There’s no reason to raise that. I just don’t think I need nearly as much money as other people need because I get so much publicity. I get so many invitations to be on television. I get so many interviews, if I want them.”

That was certainly true as Trump stormed his way through the GOP primaries, but since then the vast majority of media attention has been negative, due in large part to Trump’s controversial comments about the presiding judge in the Trump University fraud trial. Trump claims Judge Gonzalo Curiel cannot possibly be impartial because he’s “Mexican” and “I’m building a wall.”

For the record, it should be noted that Judge Curiel was born in Indiana.

Here’s more of Trump’s comments on the judge:

This article was originally published by the same author at LiberalAmerca.org.